Affinity Advantage Financial Solutions has maintained a relationship with Lexco Wealth Management, Inc since 2008. Lexco financial professionals work tirelessly to clarify your real world goals and then spend the time you deserve helping you understand your options and their consequences. Every plan is thoroughly researched and highly customized with no cookie cutter solutions. 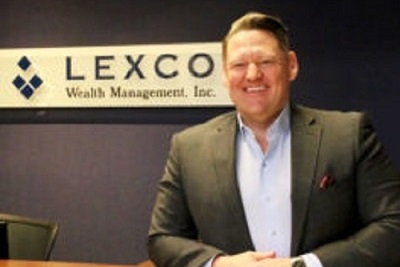 Christopher Paul Jordan founded LEXCO Wealth Management, Inc. in 1999 with the pioneering vision to provide objective advice based on academic research, collaboration and principles of behavioral finance. As Chief Executive Officer, he sets strategic direction and manages the firm’s culture and growth.

Chris brings over 25 years of industry experience helping successful families plan for and transition to retirement. His passion for the business has ranked him 15 year running within the top 1% of advisors at his previous broker/dealer, National Planning Corp1. In 2001, Chris was ranked 3rd in the nation (out of over 1,1002) at NPC and nominated by then CEO for Registered Rep magazine’s prestigious Outstanding Advisor of the Year award.

Chris started his career at CIGNA Financial Services Co., or CIFSCO, then an elite 700 person advisory. CIFSCO is still widely regarded as one of the industry’s top training platforms. Seeking total objectivity, Chris joined a 5 person boutique independent advisory and helped grow it to a 33 person firm. The result was being named Managing Director of Sanders, Smith, Miller & Jordan in 1997.

Two years later Chris started LEXCO in order to pursue a fee based business model and his leadership had previously resulted in exceptional growth. He believes that successful financial strategies are a function of investor behavior and spends time educating client on complex topics. He is a LPL Registered Principal(FINRA Series 24 held with LPL Financial) and LEXCO’s Office of Supervisory Jurisdiction (OSJ) principal.

Chris holds a BS in business management and has studied at Boston University’s Boston Institute of Finance. He has completed extensive research of the areas of retirement risk and is a 2008 graduate of an industry specific program at the University of Pennsylvania’s Wharton School of Business. Based on these studies, he authored The Distribution Challenge white paper and frequently presents his research at educational workshops at local corporations. His commentary appears regularly in both the Westchester and Fairfield Business Journals. In 2015, Chris was accepted to study at the University of Chicago’s Booth School of Business via the Investment Management Consultants Association’s (IMCA) Certified Private Wealth Advisor (CPWA) designation program.

Originally from Boston, Chris enjoys summers in Cape Cod and winter skiing with his wife and 2 teenage children. He is an avid platform tennis player and an elected officer of The United States Association of Blind Athletes, a non-profit.